Meet the UC Vocal team- The Sound of Lakeland 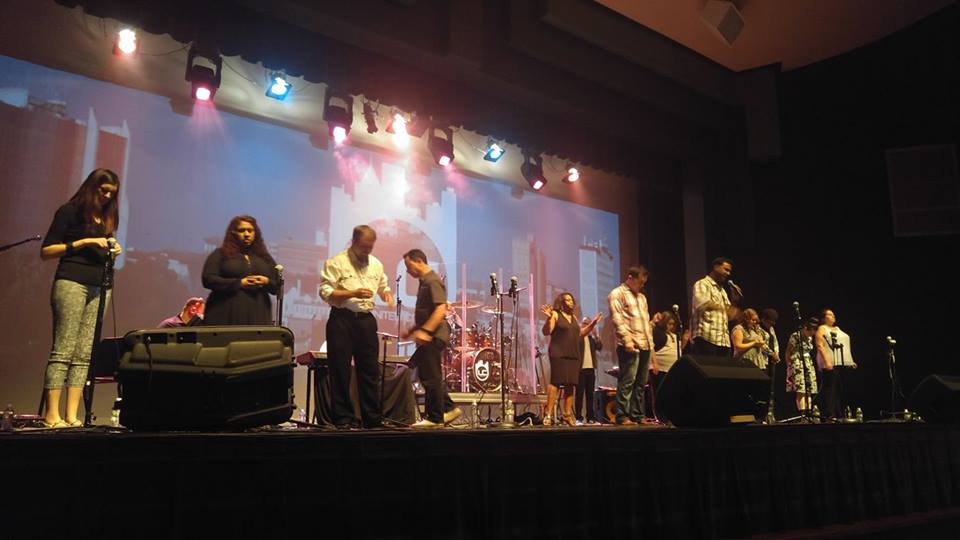 Ashley is one of the worship leaders that is apart of the UC vocal team. She has been apart of the team for about four years, since it began and has served throughout ministering to the people of Lakeland through her voice. She attends Faith Celebration church, and serves as the worship pastor there as well. She has been singing since high school, but began to lead worship in her beginning years of college, and she also plays the piano. When asked why she joined UC, Ashley’s reply:

” I believe in the vision that’s why I joined. Being apart of UC has encouraged me to really see the big picture in that we are all one body, the body of Christ.” Tessie is one of the newer members of the UC vocal team as she joined United City for the first time in October of 2016. She attends New life assembly of God, and was raised in Lakeland. She has been leading worship since the age of 13 and she has also been playing piano since the age of 7. She enjoys music, and displays a strong commitment to musical excellence and to serving the Lord. When asked why she joined UC, her response was:

“I was invited by a friend, and i loved the idea of churches of all backgrounds getting together to serve the Lord, and worship together.” Chelsy (on the Left) is a young alto vocalist who joined UC in 2014, and has been commited ever since. She enjoys singing, and learning new vocal parts and styles. She attends Trinity Life Church of God in Lakeland, and has added alot of joy and sincerity to the UC vocal team. When Chelsy is asked about why she joined UC, her reply is:

“I joined United City in order to be apart of the change in Lakeland for God. United City has helped me get further into my walk with Christ” Alyssa is also one of the newer members of the UC vocal team. She participated in the United City vocal auditions this past year, and she joined the team in October 2016. She has a dedicated passion to serving the Lord through worship, and she adds enthusiasm, and spirit to the UC vocal team. She attends Church at the mall in Lakeland, and when asked why she joined UC, her response was:

“It was a jump out of my comfort zone to put myself out there to be a part of UC. I just said to the Lord, “If this is Your will for me then I will be honored to worship You through singing on stage.” I wanted to know that none of my efforts were for earthly desires but solely to glorify the King, shake the spiritual realm, and be apart of something pure. UC has grafted me and my family in and we have a whole new extension of family. I love sharpening against believers that have a pure desire to Glorify God through the task of unity. I have been both challenged and energized by my brothers and sisters of UC” Renee (On the Right) is another key alto singer for the UC vocal team. She has a bubbly personality, and is always smiling and displaying joy through her voice. She attends Anchor point church in Tampa, and has been apart of UC for two years now, faithfully giving of her talents for Christ. When asked why Renee joined UC, her reply was:

“I Joined because I love the idea that so many people can come together and praise God and sing so beautifully. We are all so talented but we all choose to worship God together. United city allows me to do the thing I always dreamed of doing. Bringing people to God through song.” Elizabeth has been apart of UC since it began four years ago, and has dedicated time when possible to serving this team through song. She helps with the alto section for UC, but she also leads worship on the piano at her local church. She attends IPC Lakeland church, and enjoys singing with people of all different walks of life. When asked why Elizabeth joined UC, her reply was:

“I love to sing, worship, and be around like-minded people. UC allows me to do all of these things. I get to sing, and sharpen my abilities through extensive practices. I get to worship Jesus through my voice, and blend with many other talented voices who love Him also. And most importantly I get to be around and learn from people who are different from me on the outside, but inside want to glorify Jesus in this city, just like I do.” Edwin became apart of United City last year through Letra, one of the vocal leaders. The United City band was opening for an event in Plant City, and Edwin immediately felt the draw to be apart of this movement. He is apart of another ministry very similar to United City, named Heart Of The City Radio, which is a local radio station seeking to encourage and uplift local artists (More information in post entitled “Meet a UC partner-Heart Of The City Radio”). Edwin has a lot of experience with music, and has been singing for many years.

Edwin, who is currently transitioning to Winter Haven Worship Center, has a passion for worship and a burning desire to see God’s people, the Church UNITE for the sake of the Kingdom! Kevin (Pictured above to the right) joined UC this past year after attending the National Day of Prayer event downtown at Lake Mirror hosted by United City. He was invited by the drummer of the band Josh Bullard, and Kevin shares some of his heart below:

“I was so moved that evening that I asked Josh how I could become involved with this group. When the auditions came, Josh forwarded the information to me. I went through the audition process, and it was evident that God wanted me to be a part of this group. It’s always a blessing to work with people that want to share the love of Jesus with the world. Our “local world” is Lakeland, FL, and I look forward to seeing what God has in store for us. We need to be UNITED! I know God will bless our efforts as we work together to bring an unconditional, God centered love to Lakeland, Florida. Since I’m a new member, I’m still learning things, but the United City family has welcomed me with open arms, and I’m just excited to be the hands and feet of Jesus in a larger scale than the North Lakeland Baptist church where I lead worship.”

Kevin is the main Worship Leader at Faith Baptist Church in North Lakeland. He has been leading there for 2 1/2 years but has been singing since he was 5 years old. He sang Tenor/Lead in a local southern gospel quartet for 7 years. The quartet is called CrossFire Quartet and they are here in Lakeland, Florida. Keri is yet another vocalist on the UC team, she is also a newer member who has joined in the past year. She brings a unique energy and joy to the team, and is always ready to praise God through song! Danielle Barnett serves on the UC vocal team as a soprano singer. Along with being involved with the music of United City, she stands alongside her husband Justin Barnett to serve in many other capacities as well. They serve at Trinity Life Center and are committed to the Lord’s work in young people throughout Lakeland. Danielle has been apart of UC since the start, and as well as being a mother, and a pastors wife, she also works with Homes For Heroes in Lakeland helping people throughout Lakeland find a home.

Many talented vocalists and musicians have helped United City since the beginning, all serving in various capacities and for different periods of time. Many of these artists sing at different events for UC throughout the year. All of these people have contributed to the united sound of Lakeland!